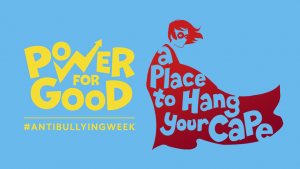 The theme of our FAB week (Friends Against Bullying) this year was ‘Power for Good’. The aim of the week was to help the children understand the ways in which they are powerful and encourage individual and collective action to stop bullying and create the best world possible.

At the start of the week Miss Walsh did an assembly about ‘Power for Good’ and the children learned about how Dr Thomas Barnardo and Rosa Parks used their ‘Power for Good’ to change the world for the better.

Throughout school, in addition to this, each key stage phase was encouraged to explore a particular aspect of bullying. Parents were invited in to school to take part in the activities too.

In Foundation Stage, the children completed activities around the theme of ‘being a good friend’. This included songs, writing and games.

In Key Stage 1, the children focused on ‘bullying because of appearance’. The children produced fantastic work about themselves and discussed their similarities and differences.

In lower Key Stage 2, the children explored the issue of ‘bullying versus conflict’. They created super comic strips based on this theme, and had lots of debates too.

In upper Key Stage 2, the children explored the world of Cyber Bullying. They created super work based on their own digital footprint, as well as learning about potential online dangers.

Each class made their own ‘friendship leaf’ and, at the end of the week, they were presented in assembly. These leaves are going to be used to make a friendship tree which will be displayed in school to symbolise our school working together to beat bullying.

You can find out more about which cookies we are using or switch them off in settings.

This website uses cookies so that we can provide you with the best user experience possible. Cookie information is stored in your browser and performs functions such as recognising you when you return to our website and helping our team to understand which sections of the website you find most interesting and useful.

Strictly Necessary Cookie should be enabled at all times so that we can save your preferences for cookie settings.

If you disable this cookie, we will not be able to save your preferences. This means that every time you visit this website you will need to enable or disable cookies again.